Latin America has not always enjoyed a sterling reputation for MBA education. Business schools in countries like Mexico and Brazil have largely been in the shadow of their northern neighbor, the US, where the MBA was first pioneered.

But business schools in Latin America appear to be on the up, with several now accredited by the prestigious awarding bodies and a few ranked by reputable publications such as América Economía and Forbes.

There are distinct advantages to studying for an MBA in one of Latin America’s Spanish- or Portuguese-speaking nations. Not least, the career opportunities afforded by some of their small but rapidly growing economies. Austerity has had an impact, but demand for highly-skilled talent is growing in industries like professional services, consulting, financial services and technology.

Many Latin American countries are also striving to become hubs of entrepreneurship and innovation, with burgeoning startup scenes in cities like Buenos Aires, Medellin, and Sao Paolo attractive to foreign students looking to establish new ventures.

There are some drawbacks. Salaries appear to be much lower than in the US and western Europe—although cost of living is generally lower as well—and political instability could damage the reputation of some of Latin America’s top business schools, such as the volatile situation in Venezuela.

Mexico’s EGADE Business School is perhaps the best-known Latin American school. Despite having only been around since 1995, it is currently the second-best MBA program in Latin America, according to the publication América Economía. Its particularly known for entrepreneurship and career outcomes in the region, as well as for the diversity of its students and for the return on investment. Tuition fees are lower than $20,000 USD — a relative steal, compared to the cost of many MBA programs offered by business schools in the country’s northern neighbor.

We cannot mention EGADE without name-dropping its closest competitor in Mexico, IPADE Business School. Alumni outcomes appear to be promising for IPADE’s MBA graduates, too, as the school is renowned for educating many of Mexico’s top businesspeople. As such, the school has many top CEOs and billionaires who teach its seminars and classes, including media baron Emilio Azcarraga and Carlos Slim, one of the world’s richest men.

Known by some as the “Harvard of the South”, INCAE Business School is held in high regard and teaches mostly via the case study method pioneered by Harvard University in Boston and follows a similar curriculum. Located in Costa Rica, INCAE offers both a two-year MBA in the country and a more intensive 15-month program in Nicaragua.

Argentina’s premier MBA provider is rated highly for its return on investment, with the 11-month course costing just $38,000 USD. The Buenos Aires-based business school has one of Latin America’s best alumni networks, with more than 15,000 graduates spread across 25 countries. The school’s location puts grads at the epicenter of one of Latin America’s hottest startup hubs.

Santiago’s Universidad de Chile is one of Latin America’s oldest business schools, with a rich history of academic excellence stretching back some 150 years. The host university is renowned for innovation in science and technology, and it has (astonishingly) educated 20 Chilean presidents and a host of Noble laureates. The 12-month MBA is known for its diversity and exchange programs abroad, and is priced at just $25,000 USD.

The private university based in Lima, Peru has cultivated a strong reputation for its MBA since being founded as a joint venture with Stanford’s Graduate School of Business 1963. It was also the first in Peru to be accredited by global education association AMBA, which ensures quality standards. QS ranks it sixth in Latin America, owing to strong career outcomes, with 73 percent of students employed three months after graduation, enjoying a 50 percent pay rise.

Also of Lima is ESAN’s closest Peruvian competitor, CENTRUM Catolica Graduate Business School. By at least one measure, it has outdone ESAN — CENTRUM has achieved the coveted “triple crown” accreditation by AMBA, EQUIS and AACSB, the other major business school accreditation bodies. That has cemented its global reputation as one of Latin America’s top MBA educators.

Located in Santiago, Chile, Universidad Adolfo Ibanez offers several MBA programs aimed at local professionals as well as international students. In partnership with Spain’s ESADE Business School, the school also offers a Multinational MBA program which includes modules in various locations across the world, including Barcelona, Silicon Valley, Mexico City, and others. Universidad Adolfo Ibanez is currently ranked as the best business school in Latin America, according to América Economía. 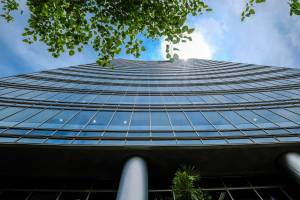 For Brazil, arguably the best business school is Sao Paulo’s FIA Business School, currently ranked highly in America Economia’s Latin America MBA ranking, and accredited by AMBA. Its MBA is taught in English, ensuring a certain level of internationality, and students can opt to take Portuguese lessons to learn the local lingo, free of charge. That would provide a good entry point into the Brazilian capital, a vibrant emerging market with plenty of commercial and cultural opportunity.

But the FGV EAESP São Paulo Business Administration School would give FIA a run for its money. The school prides itself on bringing research excellence into its teaching, having been recognized as Latin America’s first think-tank. It also has superb international links, with partners in more than 100 countries. In addition, the school offers a plethora of double degrees for students who wish to specialize.